Long Midnight Publishing, in association with Douglas Lindsay and The Intergalactic Council are delighted to announce the publication of the much-anticipated final part of Lindsay's Blog Trilogy, KIDS, AND WHY YOU SHOULDN'T EAT MORE THAN ONE FOR BREAKFAST.

This concluding part of the Trilogy contains over thirty blogs from the time when his children were young and used to do the kinds of things on which one can look back and laugh, even if it is from within the confines of a straitjacket.

"If you're interested in learning valuable parenting lessons," said literary critic, Professor Malcolm Connery of the Glasgow Institute of Special Things, "then this probably isn't the right book."

Following on from the polemical FOR THE MOST PART UNCONTAMINATED, and the autobiographical THERE ARE ALWAYS SIDE EFFECTS, Kids, And Why You Shouldn't Eat More Than One For Breakfast is the must-read parental memoir from the writer the critics call, "that guy who wrote the thing."

While Lindsay is believed to still be hidden away in the caves of northern China, overlooking the Heilongjiang River, working on the follow ups to Plague Of Crows and We Are The Hanged Man, wild rumours are circulating in the publishing world that he is about to embark on a world tour to promote Blog 3, as the book is known by insiders.

"Just the idea that Lindsay might do a reading to 90,000 people at the Hollywood Bowl," said Connery, "is enough to make more than half the planet think that it's worthwhile getting up tomorrow morning."

The other half of the planet was unavailable for comment. 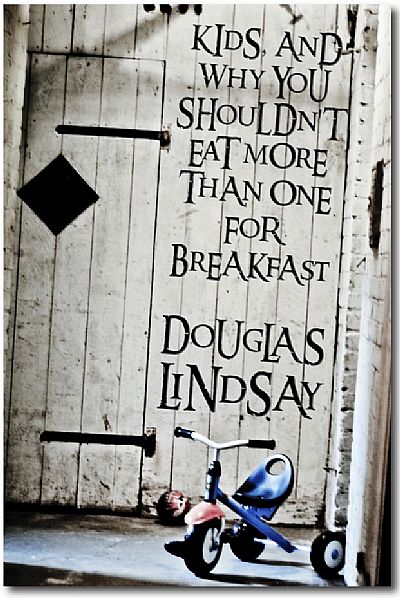