Excitement is mounting in the publishing industry and, indeed, around the entire world, with the announcement of the forthcoming collection of Barney Thomson shorts, THE CURSE OF BARNEY THOMSON & OTHER STORIES. As 2014 began, no one anywhere on Planet Earth had the slightest idea that the publication of this rare treasure-trove of Barney Thomson shorts and off-cuts was on the cards, and yet Long Midnight Publishing insiders now indicate that its arrival is imminent.

1. So, The Curse of Barney Thomson isn't a full length novel. Like, what the fuck, man?

No, it's not. Barney Thomson author, Douglas Lindsay, is known to be working on a follow-up to 2013 smash Plague of Crows at the moment, and people close to the inside of Lindsay's head indicate that once that is completed, he's likely to embark on the We Are The Hanged Man sequel, WE ARE DEATH. So rather than being an all-new book, CURSE is a collection of shorts and never seen before Barney scenes, sure to delight both fans and newcomers to the series.

2. So, this is just LMP cashing in on Lindsay's superstar status, and ripping the public off for even more cash with a cobbled together collection of old shit that wasn't good enough to publish in a novel in the first place?

The bulk of CURSE is made up of five original short stories, packaged together for the first time in a deluxe ebook with all-new cover, meeting the demands of millions of Barney fans everywhere.

3. Is there anything new in this book at all?

Indeed. The longest story in the collection, THE ADVENTURE OF THE MARBLE TIBETAN HEAD, is brand new for this year, and therefore the most up to date Barney story ever written. It's got something of an old-fashioned vibe about it, to tie in with the old-fashioned vibe of the groovy old-fashioned cover. 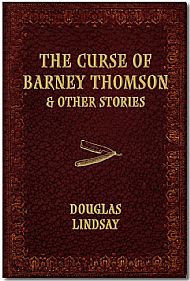 4. So how long is this whole thing? Will we be able to read it in ten minutes? Half an hour? A week?

All told, it probably chimes in at about a quarter length of a novel. Some of the short stories are really short, there are a few old, previously discarded barbershop scenes, and then there's TIBETAN HEAD, which comes in at around 9,000 words, which is kind of the norm for a stand-alone short ebook. What we're looking at here is like an official Barney Thomson bootleg. Mostly one for the fans, but also a good introduction to the series for newbies.

5. Any chance that Lindsay bothers his arse to write another full-length Barney Thomson novel in the future?

That's the question that everyone's asking. Indeed, it's been raised in Parliament several times, and it's known that GCHQ Cheltenham are keeping a close eye on Lindsay's computer, waiting to see if there are any signs that he's working on something new and big that could help save the economy and regain Britain the Empire. There is a rumour that he'll start working on an all-new, full-length Barney book once the Crows and Hanged Man follow-ups are out of the way, but we'll have to wait and see. Until we know for definite, members of the public are advised to read The Curse of Barney Thomson & Other Stories, get in emergency provisions, and listen to the radio for further updates.

THE CURSE OF BARNEY THOMSON & OTHER STORIES will be published in late January, 2014.