Tomorrow sees the official digital release of Douglas Lindsay’s new novel, BEING FOR THE BENEFIT OF MR KITE! This morning he was once again invited on to Radio 4’s flagship Today programme to discuss the novel, the story behind it and whether or not it represents a new departure for the man they call ‘the bloke who wrote the thing…’

JOHN HUMPHRYS: Your new novel… twenty years in the writing, or something you threw together over a couple of weeks in between watching episodes of The West Wing?

DOUGLAS LINDSAY: It’s been a long road. I think it all started when I was five and I lost my favourite te…

DL: The book is all about a character called the Jigsaw Man. My original title was IN SEARCH OF THE JIGSAW MAN. Blasted Heath, my publisher, thought people might think it was a crime novel. You know, they’d presume the Jigsaw Man is this fellow who cuts people into pieces, or he’s a pathologist who glues people back together again to try to work out what brand of meat cleaver they were cut up by. So we canned the title.

JH: So who is he then, the Jigsaw Man?

DL: He does jigsaws.

JH: This is a book about a guy who does jigsaws. That’s pretty fucking on the edge. Why the Beatles title?

DL: The main character is a Beatles fan.

JH: How mundane. Makes a change from Bob Dylan, I suppose. This Jigsaw Man is the main character?

DL: No, he’s more the Gatsby of the piece, the main character is the narrator, the Nick Carraway if you like.

JH: So, you’re ripping off Fitzgerald as well as the Beatles. Nice. Anyone else? Art Garfunkel? The Muppets? Bill & Ben, The Flowerpot Men?

DL: I think the really intriguing thing about writing a novel like this one, where you have a particular starting point but no particular direction…

DL: Certainly, that’s a term that’s tossed around like a penguin at an orca convention, however on this occasion I think it’s more than justified. The kind of narrative we have here is…

JH: Author thinks comparison with one of the 20th century’s greatest writers is justified. Dude, seriously? Look, we’ve not got much time, there’s some actual news – lots of it, in fact, and most of it really depressing – to discuss this morning. One last question. Is this your new thing now, I mean you’re not writing crime novels any more and you’re just going to bore people to death with this Beatles-influenced, surrealist shit, or are you not quite finished boring them to death with poorly-plotted crime books, where sex and foul language substitute for story?

DL: The next Thomas Hutton novel, THE BLOOD THAT STAINS YOUR HANDS, is already in the bag…

DH: … and I’ve just begun work on the Hanged Man follow-up, so there’s plenty of…

JH: Look, Duncan Lindsay, thank you for your time. I’m sure our listeners, if there are any of them left, have been fascinated. 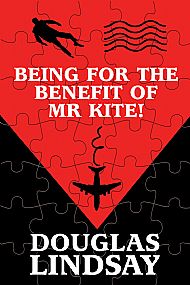