Filming will be completed this week on The Legend Of Barney Thomson, Robert Carlyle’s adaptation of the first novel in the series, THE LONG MIDNIGHT OF BARNEY THOMSON. They’ve been shooting on location in Glasgow now for the past few weeks, a very visible presence as they’ve moved around to various spots, from George Square to the Barrowlands, Bridgeton Cross to the Red Road flats. No word yet on release dates, but I guess they’ll be looking at next spring and festival season. There have been some authorised photos from the shoot, and a lot of unauthorised ones, with paparazzi and their ilk standing on the periphery, hoping to catch a glimpse of Emma Thompson in her make up or Ray Winstone eating lunch. 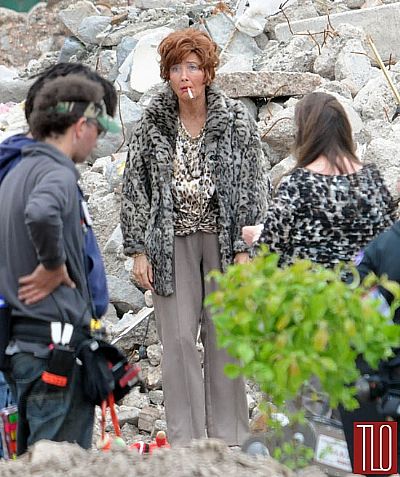 Obviously, as a celebrity writer read by millions around the world, I can sympathise with the stars and the intrusion they feel from the photographers trying to capture their every single living second. At this very moment, there’s a guy hanging from a tree across the road from my house, photographing me as I write. It’s weird living under this kind of pressure.

Went up to watch filming a couple of weeks ago. At some point, in the middle of the night outside Barrowland, me and my kid were sitting back beside the monitors while the crew bustled around setting up the next scene. A couple of fellows walked by. Seeing us hanging out, one of them said to the other, ‘They must be the stars.’

Comment from Frank N Stein at 19:24 on 03 July 2014.
What about 'a room with no natural light?'
Comment from Douglas at 20:57 on 03 July 2014.
Ah, yes... I keep writing other books and saying to Blasted Heath, oh, do that one before Room. Given that I'm about to fall a little behind the curve with book writing, I don't think there'll be anything standing in the way of Room once Hutton 3 is out.
It's probably a perfectly good book 'n all, but it's romantic drama really - even though the Heath will call it literary noir - so I think the delay is about me lacking confidence in it.
Comment from Becky Stephens at 04:52 on 04 July 2014.
Do you think the Barney Thomson stories will be a series of movies? What are the chances of bringing Barney Thomson to the small screen as a television series? Thank you!
Comment from Douglas at 09:38 on 04 July 2014.
Becky,
Would be great, but I haven't had any discussions about that. That first book/film could easily be stand alone - as it was originally intended - so there needn't be any drive to make any more. It will, ultimately I'm sure, come down to whether or not the film is successful; and whether, at some point, some American movie executive decides there's money in it. I haven't discussed it with the movie producers or RC, so don't know if they like or have even read the other books.
There's never been any talk of TV either.
So, in short, I guess we're all just waiting to see how the movie turns out and how successful it proves to be.
Fingers crossed!
Douglas
Comment from Rose at 19:20 on 24 July 2014.
Will the books be re-released in the USA?
Comment from Douglas at 14:16 on 28 July 2014.
Rose,
Sorry, just saw your question. While I can get the re-releases out in the UK, I don't really have the wherewithal to get them distributed overseas. I guess it depends on whether the movie gets any kind of decent distribution in the USA. Not sure on whether that's going to happen. If it does, then it'd be nice to think that someone would be interested in picking them up.
Douglas