The Insider's Guide To FROM #INDYREF TO ETERNITY

Some people might have noticed, albeit, not too many, that FROM #INDYREF TO ETERNITY – the collected ramblings from my six months writing a Monday morning column for the Herald Online – is now available in paperback.

This is something that just kind of happened, one of those things that I never went looking for. I published them as an e-book, the editor at Luath Press in Edinburgh read it and asked if they could put it in print. I said yes.

It was all a bit of a pre-Christmas rush. They’d hoped to have the book printed and bound and off to shops by early December, in order to hit the Christmas market. After all, it is the kind of easy-to-read, mindless drivel that one would fall asleep with in one’s lap on Christmas afternoon. As it was, Luath were largely defeated by the slow grind of the publishing business, and the book wasn’t available until roughly the 23rd December. As release dates go, it’s in the bottom five out of the over three hundred and sixty available.

Early on they said they wanted to give it the tagline – How Proud Scotia Came Within A Bawhair Of Breaking Free. Really, that is a God-awful tagline. Bawhair? I mean, yes, the book is not an in-depth political thesis that will be studied by university students for decades to come. Nevertheless, bawhair is just a rank awful word. I immediately wrote and asked them not to use it. They immediately agreed, but had already issued to the wider publishing world that this would be the title. So now, two months later, the book itself doesn’t have the word bawhair on it, but the online world still hasn’t caught up, because obviously it takes more than two months to change an 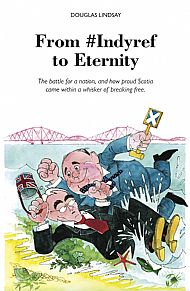 Of course, it’s not as though the debate ended with the vote. The SNP have played a ten-point defeat as though there were two votes in it, Labour have fallen apart, for all the world like they got their arses handed to them, and the others have disappeared. With the explosion of SNP membership, the switch from Salmond to Sturgeon, the ascendancy of Jim Murphy, the retirement of Big Gordon and the on-going stramash over more powers, the events of last summer now seem somewhat out of date. In that sense the book didn’t just arrive three weeks late in bookshops, but three months. Nevertheless, in the antediluvian world of publishing, it was a great effort to get it out as quickly as they did.

I’ve thought about bringing back Dr Shackleton for a weekly column on Scottish and world events. I tried, but without the imperative of a Monday morning Herald deadline, it just wasn’t happening. The referendum campaign, which I’d found utterly dispiriting, had sucked my soul dry, and I’ve been enjoying not having to follow the mindless bullshit of politicians on a daily basis.

I wrote an end piece for the book, at two hours’ notice, the day before it went to print. Obviously I needed the imperative. With that, Dr Shackleton is likely done.

If you’re in Scotland, hopefully you might come across the book in an actual shop. Online, it’s available from the usual sources. For example, you can get it from Amazon UK, by clicking on this graphic showing its only current review: 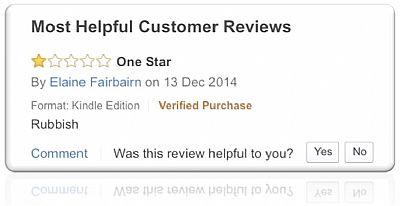