The Forthcoming Return of DCI Jericho - 1

Summer is over, back to work in my apartment in Tallinn. The last two weeks spent going over copy edits, now time to get down to something new. More on that at some future date (when, for example, I’ve worked out what it is.)

Meanwhile, we have the return of DCI Jericho. WE ARE THE HANGED MAN has been given a bit of a spit and polish; new cover, new blurb, slight rewrite of the text. If you’re one of the few who’s previously read the book, you won’t miss anything in this update. I tinkered with Jericho’s character, so that he’s moderately less miserable. These things are still relative, of course. That aside, there’s a little less swearing, and the intention was that the tone of the book would be a little less gloomy. (However, anyone coming to it new is still going to think it’s pretty damned gloomy anyway.)

Here’s the new blurb that’s going to have book buyers flocking in droves:

WE ARE THE HANGED MAN

The Hanged Man is coming, and there's nothing you can do to stop him…

Durrant was the most brutal, psychopathic killer the Met had ever come across. Captured in the early '80s, he should have been in prison for the rest of his life. Someone had other ideas.

Thirty years later, DCI Jericho, the man who put Durrant away, is working in quiet anonymity in the West Country, living with the guilt of the one case he never solved; the disappearance of his own wife.

A Hanged Man arriving in the mail seems like a trivial joke, but it is only the beginning. Soon people are disappearing, and Durrant is back to his old ways.

Suddenly Jericho is being thrown to the wolves. The noose tightens, the body count rises, and events spin helplessly towards a shocking and bloody climax.

And here’s the new cover: 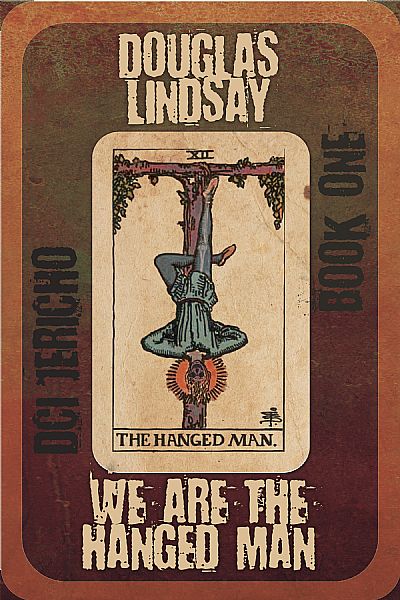 The changes won’t be effected online for a month or two yet. Blasted Heath will obviously need to factor in the $1.4m promotional campaign etc., plus appearances on Graham Norton, the Today show on Radio 4, Jimmy Kimmel, and a live broadcast from inside the International Space Station.

Tomorrow we’ll take a look at Jericho Book 2, WE ARE DEATH.