5 Astonishing* Facts About SONG OF THE DEAD

(*May not be astonishing)

To mark publication day for SONG OF THE DEAD, here are five astonishing facts about the novel the critics are already calling, "the new book by the guy who wrote that other one."

1. SONG OF THE DEAD is the first book in the planned Detective Inspector Ben Westphall series. (A recent poll in the Guardian found that 76% of people believe the main issue with the world today is that there aren’t enough fictional police officers, so he comes just in time.) What does Ben Westphall bring to the table of detective fiction? He’s a former SIS operative, has a paralysing fear of flying and he can sort of sense dead people, aspects that will be developed further as the series progresses.

2. Millions of readers around the world have been asking where the name Westphall comes from. Well, I had it in my head as a name mentioned in Theoden’s classic “Where was Gondor” speech in The Two Towers. (There’s no connection between my character and Lord Of The Rings, I just liked the sound of the name.) However, I’ve just checked that now, and it turns out the quote is, in fact, ‘Where was Gondor when the Westfold fell?’ (You can watch it here. Comes at 2:02 in this clip.)

So, looks like I was wrong, and his name should in fact be DI Ben Westfold. I’ve asked Freight if they’ll pulp all the books and let me rewrite. Waiting to hear back.

(As to why I had a random place name from Lord Of The Rings in my head, that’s what happens when you watch a movie way too often. Ask my kids, Galadriel and Shagrat.)

3. The book is largely set in Estonia (Tallinn, Tartu, and the forests east of Tartu) and Scotland (Dingwall, Anstruther, Aberdeen, the A96, and places in between.) Extensive research was undertaken in each of these places, albeit in the case of Anstruther, that was when I was a kid, first two weeks of every school summer holiday, back in the 70s.

4. SONG OF THE DEAD is my fifteenth novel. Like each of the fourteen before it, the plot came to me in a dream, told by an ancient Caledonian witch-goddess.

5. The second book in the series will be entitled THE BOY IN THE WELL, and will be out, from Freight Books, just as soon as it’s been written, edited, copy edited, proof read, and slotted into Freight’s slate. 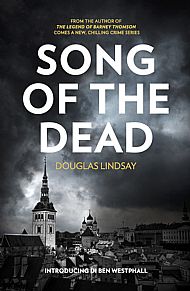 A man comes back from the dead. Ben Westphall returns to the living.

Ex-spy, DI Ben Westphall, has retreated to the north of Scotland to live a quiet life, but the reawakening of a cold case will draw him quickly into the dark world of international organ trafficking.

Twelve years after the body of John Baden washed up on the shores of a lake in Estonia, he reappears. Westphall heads east to investigate, but back in Scotland, Baden’s apparent return from the dead has not gone unnoticed. An old conspiracy begins to unravel, people are being murdered, and soon Westphall finds himself in a dark, criminal domain, just as dangerous and deep in the shadows as those he thought he’d left behind…

"Song Of The Dead is a Tartan Noir tour de force. Lindsay writes with an economy and skill all too rare in modern fiction. If you haven't read the Barney Thomson author yet - buy this and join the bandwagon, you'll find me on there, beating the drum for this brilliant book." Tony Black, author of Truth Lies Bleeding