THE LEGEND OF BARNEY THOMSON is slowly being rolled out around the world, in dribs and drabs. Now you’d think what with me being a) the author of the book and b) a major player in the movie business – kind of like Stanley Kubrick multiplied by Billy Wilder – that I’d have some idea of what’s going on.

Sadly no. As Bill Bailey says in Hot Fuzz, “nobody tells me nuthin’”. So I get my information from IMDb, same as everyone else, and the movie page is only being updated sporadically.

Still, there were news reports when a Russian distribution deal was signed for the movie, and it’s one of the few countries listed on IMDb release dates. And then yesterday, this thing of beauty appeared on the Internet: 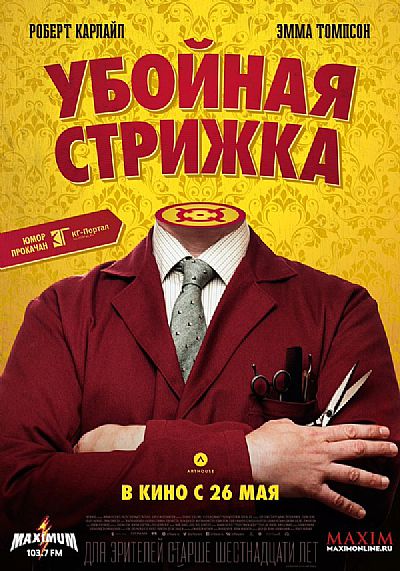 It was said that the title has been altered to LETHAL HAIRCUT, which I rather like. (In fact, it made the shortlist for the titles for each of the first three Barney novels.)

Sadly, however, the Russian speakers in Mrs Lindsay’s office, who are legion, say that the title translates as KILLER HAIRCUT, which is more sensible (and yet still a terrible name for a film…), but which sadly invokes neither Danny Glover nor Mel Gibson.

Anyway, I'm sure Mr Carlyle doesn't mind being decapitated by the Russians. Happens to us all eventually.

We shall wait and see what the North Koreans do with it.