Back Catalogue 3 - Swearing and Sex

In today’s exciting edition of Back Catalogue – the series about my re-published old books that critics are already calling ‘Gone With The Wind without the aliens’ – we’re looking at the DS Hutton crime novels.

One of the side effects of the old Blasted Heath editions dropping off the face of the Earth, is that none of the previous Amazon reviews have reappeared in their republished state. I’d hoped it would happen automatically, but it hasn’t worked out like that. I’ve now begun a correspondence with Amazon to see if we can make it happen, but as any fool who’s attempted to actually correspond with another human being at Amazon knows, it’s like trying to order breakfast from a Balrog.

There were nearly 600 reviews for THE UNBURIED DEAD. Shame to lose them all. I do, however, have a note of the start of one from a couple of months after the book was first published:

1-star: If this book were to take human shape it would be an acne ridden teenage boy who thinks making fart noises under his arms is witty and attractive to girls…

Sucks to not have that one up there anymore.

1 star: DON’T READ THIS BOOK! Unless you enjoy gratuitous swearing and sex…

…which sounds more like 1940’s pulp fiction blurb than a one star review.

THE UNBURIED DEAD was first written in 1997. It saw the light of day as an online novel, 21 YEARS ON THE BACK OF DIXIE KLONDYKE’S SPANISH GUITAR, in 2001. Then it was put into print and published on Amazon Kindle in 2010, but shortly afterwards I took on Al Guthrie as my agent, and he thought he could get it published elsewhere. So DIXIE KLONDYKE was removed from publication, was given a brush and polish, and retitled.

Al sent it around the houses; we had an in with one editor from a major crime fiction publishing house in London, and I did some further work on it to whip it further into shape, but ultimately it fell through.

By this time Al had stopped being my agent and had set up Blasted Heath, so they took it on and it was published in January 2012.

The second book in the series, A PLAGUE OF CROWS, originally started life as BARNEY THOMSON 8, but early on I decided that a second Hutton book was needed more than an eighth Barney book. And by “needed”, I mean it was more likely to sell. The fact that Plague of Crows has comprehensively outsold Barney 7 is at least proof that one of my writing decisions in life was correct.

The third in the series, THE BLOOD THAT STAINS YOUR HANDS, has a plotline that feels more suited to an episode of Midsomer Murders, but since I don’t write that kind of crime series, I used it for Hutton.

The fourth unpublished Hutton book, SEE THAT MY GRAVE IS KEPT CLEAN, is a wrap, and the gang at LMP - Shackleton, Beth, Malky Eight Feet and me - are just planning the best time to release it, factoring in the two new books I have later in the year from Bastei Luebbe, and the on-hold title, THE BOY IN THE WELL, from Freight.

And that's it for the moment for Hutton, although there will be a five, six and seven at some point. Click on the images to share in the magic. 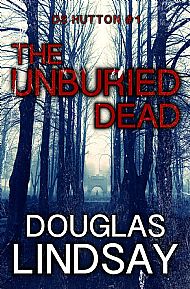 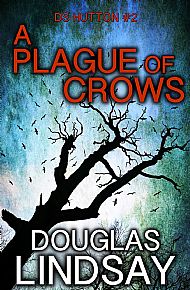 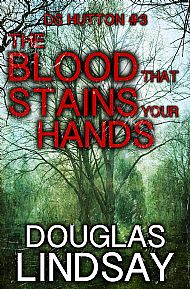