In news that sent the book world into paroxysms of vague curiosity, Long Midnight Publishing today announced the re-launch of Douglas Lindsay's seminal noir classic, SONG OF THE DEAD.

IT was a perfect, Christmassy morning in Glasgow, the city covered in a pure white counterpane of snow, as I talked to Dr Ian Shackleton of the Glasgow Institute of Special Things.

“It hasn’t snowed like this in Glasgow since 2010,” I said, as we stood at the window of his office on the 93rd floor of the Burj Prepostera, in the heart of Glasgow’s exclusive Carthaginian quarter, sipping warm spiced mochachocca latteccinos from the new hipster coffee place on the Gallowgate, three blocks away. 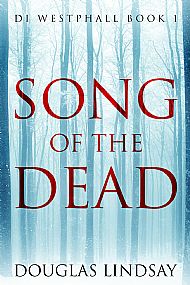 Shackleton chuckled, for all the world like he was in a Dan Brown novel, then said, “And neither has it snowed today. It doesn’t really snow anywhere anymore. Your mind has created this snow as an answer to the awfulness of the world.”

We looked out upon the carpet of white. The streets were unusually silent, the thick snow keeping cars locked in garages, reluctant drivers tucked up in bed.

“But I can see the snow,” I said, indicating the city, white as far as the eye could see, stretching in the far distance to the dazzling snow-covered Campsies, etched beautifully against a clear blue sky.

Dr Shackleton placed a comforting hand on my shoulder and squeezed.

“I’m afraid, young man,” he said, “you’re completely delusional. Doctors, psychiatrists and crazy people on the Internet are discovering this more and more. Every day the news is so bleak and terrible, so horrendously, soul-suckingly apocalyptic, that our brains create these mirages as a way of insulating ourselves against the world. We retain, most of us, only the most tenuous hold on reality.”

As the Doctor’s words came crashing down like a hammer on the fragile glass of my imagination, the snow melted away, and suddenly we were looking at the city as it really was, beneath a blanket of grey cloud, smeary rain drifting over the low rooftops, passers-by bent double like old hags against the wind.

We weren’t on the 93rd floor, there was no Carthaginian district, and we were drinking plain old coffee with a bit of milk, no sugar.

“Yes,” said Shackleton. “You’ve heard people talking about the current closing of the American mind. What we’re also witnessing around the world is the Narnia-isation of the mind. We are all taking refuge in the dark corners of our own imaginations. Some people will be doing it through the use of recreational drugs. You don’t need to, because you’re a genius.”

Together we looked down from the second floor window at the sad Christmas decorations across the street. A lone dog sniffed at a bin. A woman lay huddled in her sleeping bag in a doorway. A charity shop worker rearranged the Jaeger jackets in the window.

“Wait,” said Dr Shackelton, “didn’t you want to talk about Song of the Dead?”

“Oh,” I said, “I suppose. It’s available as an ebook again. Click on the image. Doesn’t seem so important any more.”

Another Brownian chuckle came to Shackleton’s lips, then he said, “Image? Only you can see the image.”