It’s a busy year ahead at Long Midnight Publishing and, as a result, changes have been made in the organisational structure here at company HQ in Geneva. While much of this is nerdy behind-the-scenes managerial tinkering, of little interest to most readers, there are some moves that will have a more direct impact on company output going forward.

The first of these is that in-house book cover designer, Ellen Badstuber, has been moved sideways out of the now defunct Graphics Department, into the newly created Disinformation And Cyber Warfare Division. This has proved controversial in the boardroom, as at the same time the executive decision was taken to re-imagine several of the LMP book covers, work which then had to be outsourced.

Nevertheless, Chief Executive in Charge of Strategic Investments, Marcus Coleridge, is bullish about the new approach.

‘What we have here, first of all, is the new cover for Lindsay’s classic literary noir title, A Room With No Natural Light. The colours of the palette represent the rich warmth of an English summer, with the cracks in many of the individual panels illustrating the fissures in the relationships that run through the narrative. Or, you know, something…’

Business insiders estimate that the cover change could add over £17million to LMP’s turnover for this financial year. 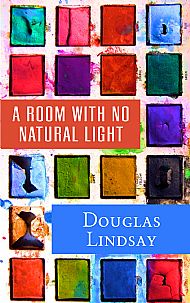 The new cover blueprint for the future of the DCI Jericho series will be revealed tomorrow. Friends of publishing experts are predicting a boom in sales, with a resultant surge in markets worldwide, leading to global peace and prosperity for all by April of this year.