TOUCH OF THE SPIDER is an all-new DI Westphall short story, available free for readers signing up to receive Hodder’s new Douglas Lindsay newsletter. Telling the story of the serial murder of Lycra-wearing cyclists in the Highlands, Touch of The Spider is the short story that critics have already called “a thing he wrote” and “a story with a fully developed theme but significantly shorter and less elaborate than a novel.”

Newsletter recipients will then get all the up-to-the-minute news throughout the year on Lindsay, his upcoming projects and appearances, and the Westphall series, including:

Click on the image to receive TOUCH OF THE SPIDER free to your inbox. 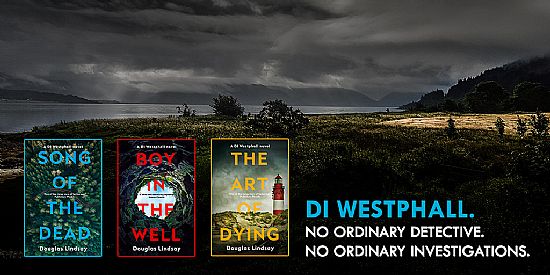 Extract from TOUCH OF THE SPIDER:

Standing with Detective Sergeant Sutherland in the ops room back at the station, looking at the photographs of the three victims. One woman, two men. They’d all been wearing Lycra, in the bright colours of the day. The first victim – Tom Culrose – took a direct hit from the front. Abdomen flattened, then, in the estimation of the SOCOs, the driver had reversed over the body, one of the tyres slipping off the skull onto the neck. The other two – Stuyvesant and Dan McGowan – were struck from behind. Similar effect, though McGowan’s back was broken. Unlike the others, he was still technically alive when he was discovered. Died in the ambulance on the way to Inverness.

‘If we narrow the potential perpetrators down to every motorist in the UK who hates cyclists,’ says Sutherland, ‘we can reduce the list of suspects to fifteen million.’

Lovely dry delivery. Sutherland takes a bite of doughnut, chews for a moment, then has a slug of coffee.

Sutherland takes another glug from the cup, then uses it to indicate the board.

‘I know you were joking about every driver hating these guys, but that’s still the go-to explanation. We’re all thinking it. The only thing that connects them is fluorescent Lycra. Our killer had just had enough, but they didn’t see red, they saw luminous lime green.

Sutherland tips the rest of the cup of coffee into his mouth, and then uses the empty cup to point at the board again.

I can feel the sadness of Claire Stuyvesant. She’s here with us, as much as the whiteboard, and the table, and the seven chairs, and the ficus benjamina that gives life to this cold, windowless room where the bodies of investigations are dissected.

‘Someone wanted one of these people dead, and so they killed the others to make it look like a thing. That’s what we need to do. Pin down that one, and then we’ll find the others were random. So, for the moment, three separate murder enquiries, working on the basis that two of them will go nowhere. Who wanted one of these people dead? That’s the question.’

Sutherland takes a drink from the empty cup. ‘Not bad,’ he says.