I produced the first draft of the second novel in the DI Westphall series a long time ago, having been commissioned by Freight to write a follow-up to SONG OF THE DEAD. It was edited (or saved from oblivion more like) by fellow Tartan noirist Russel McLean, and the book was due publication one bleak September. And then, in what commentators called “the most catastrophic literary event since the destruction of the Library of Alexandria” and “a thing that happened”, Freight went out of business. Thousands lost their jobs, and writers were turfed out onto the streets, forced to eat gruel and write fake self-help letters for the Sunday Post.

It seemed the Westphall series had been lost. History became legend, legend became myth, and for two and a half thousand years the series passed out of all knowledge. Until, when chance came, it ensnared a new publisher.

And now, as followers of the series will know, Westphall is back. Song of the Dead was published by Hodder imprint, Mulholland, in February, and today, after so long in the wilderness, here comes Westphall Book 2, BOY IN THE WELL. The Cillit Bang Active Foam Soapscum and Shine Citrus Force Booker Prize awaits. 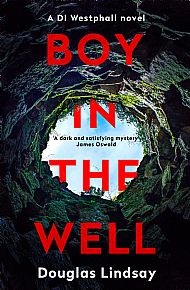 He removed his backpack, and settled into position, taking a moment to enjoy the view, for all the world world like as though we’d arranged to meet here, rather than it being complete chance.

‘Odd approach you just made,’ I said.

‘Didn’t use the paths. Came up from over by Loch Glass.’

‘Bit marshy lower down, but…,…’ and he finished the sentence by tapping his boots, which were solid, expensive, high over the ankle.

‘Like Sauchiehall Street up here,’ he added, as a family of four walked past, in classic formation, younger kid up beside the parents, older child trailing slightly behind, tripping over her bottom lip. I’d only seen two other people for the previous twenty minutes.

He laughed lightly, and the kid at the back glanced round at him, quickly looking away when she caught my eye. ‘I always think, get off my mountain,’ he said. ‘I mean, it’s classic, isn’t it? Nice day like this, and you have people dragging kids like that up here. Fair-weather walkers, the bane of the Munros. I think, where were you when the snow fell? Where were you when the wind blew?’

He shook his head, as though even he didn’t have any conviction in what he was saying.

‘Where were you when the Westfold fell?’ and he laughed again, and finished with a bit of a grumble.

I smiled, and had a moment of lamenting the Lord of The the Ringsconversations we never had over dead bodies at the morgue.

He opened his bag and pulled out a sandwich and a bag of sea salt and cider vinegar crisps, opened it, offered it to me, . I shook my head and he started to eat.

‘What have you got there?’ he asked.

‘Ham and tomato,’ I said, still feeling that there was something slightly surreal about this. I had genuinely only ever talked to Sanderson while standing over a corpse, and I’d also expected that I’d never see him again. I’d presumed he had died, somewhere in the world, while attempting to chalk off some item from his bucket list.

Maybe this was on his bucket list. Climb Wyvis.

For someone who had lived in Beauly, that would have been a pretty unimaginative bucket list.

And he made a small gesture with this artisanal sandwich, then took his first bite. He laid the sandwich on his knee, then reached once more into his bag, producing a flask.

‘Thanks,’ I said, feeling unprepared in my last last-minute dash up the mountain. I thought I’d done well making a sandwich and throwing in a bottle of water.

He removed the cup-lid, the white cup beneath, and unscrewed the top, poured out the liquid and handed the bigger cup to me.

‘That’s not tea,’ I said, for some reason finding it funny.

‘Of course not. It’s a nice day. Why would we want tea? It’s sauvignon blanc.’

‘I’ll take the smaller one, thank you,’ I said, smiling.

He passed over the white cup, we tapped the plastic together, and then took our first drink.

Have to say that sitting at the top of a mountain, looking out west across the hills, the wine tasted damned good.

‘There’s no such thing as bad wine,’ he said. ‘You’re just drinking it with the wrong food.’

‘Did you get that from a fridge magnet?’ I asked, and he laughed.

The laugh died away, the moment passed, we drifted into silence. Far in the distance we could see a low-flying plane, a fighter jet, presumably a Typhoon, although I couldn’t make it out from there. Just the one, flying beneath the level of the mountain, too far away for the sound to have reached us yet.

‘What happened to you, Peter?’ I said eventually.

He grunted, as though disappointed by the question, but eventually, after another bite of his sandwich, another swallow of wine, another reach into the packet of crisps, he shrugged and said, ‘I suppose I did just fall off the map. What were they all saying?’

‘I think if you were to amalgamate all the theories into one, it’d be that you had a secret gay lover and had gone off to Costa Rica to die of AIDS.’

He laughed, loudly enough that I ended up laughing with him. It had all been kind of stupid, especially now, considering that here he was, no more than a few miles away, living much the same life as he had been before, minus having to go to a mortuary every working day.

We settled into a comfortable silence, the subject having been broached, while we ate and drank, looked at the view, and waited for him to finally decide to talk.

‘The world is a shit-basket, Ben,’ he said eventually. ‘I wasn’t fed up with work, or anything. I wasn’t tired and drained by all that sadness, all the death. We’re in Inverness, not downtown Baltimore, ; it was never exceptional, it never really weighed me down. But the news. My God, every day, the news. The world out there, this God-awful sewer that humanity has created … I couldn’t stop reading about it, couldn’t stop thinking about it. And I just got to thinking … I really believe, this world, or at least, our civilisation, is ruined. Absolutely, unequivocally, unavoidably ruined. I don’t know how the end will come. Plague maybe. Climate change and colossal ecological disaster. Some terrorist gets hold of a nuclear weapon,perhaps, or not even a terrorist. One of the people that already has them just chooses to do something indescribably stupid. Russia or Turkey, the damned Yanks or just that rotund little fuck-muppet in North Korea.’

‘Turkey doesn’t have nuclear weapons,’ I found myself saying, the only thing he’d said so far that I thought needed correcting.

I laughed, Sanderson took another drink, indicating the mountains beyond.

‘However it comes, it’s coming. Society will fall. We will fall. Scotland, Britain, Europe, the West, all of humanity … This year, next year, five, ten years, who knows, but it’s coming. And I just thought, why am I doing this? Why am I spending my days doing this? The last days of human civilisation? Why not just get out on the mountains? Why do it once or twice a month, when you can do it every day? So, I moved to Ullapool. Some days I go fishing, some days I walk up hills.’

‘Wow,’ I said. ‘That’s impressive. What d’you do when it’s chucking it down with rain?’

‘You know how good a shower feels after you’ve been up a mountain all day in the freezing rain? You know how good a Château La Garde, Pessac-Léognan 2009tastes? You see, it’s not just the hills, or the fishing. Time is short, it really is. Why waste it, why waste any of it? Every meal is good, every drink should taste like this,’ and he indicated his cup, taking another sip as he did so.

‘You sound like you’re dying of cancer,’ I said, though I did not mean it in any maudlin way.

‘It’s civilisation that’s dying,’ he said. ‘Greed, stupidity and hubris. But it’s not like you don’t know that already, Inspector. You’re surrounded by it in your job, and you’ll have seen far worse in your SIS days than you will’ve since you’ve been up here.’

He finished his cup of wine, then opened the flask and offered me a little more. I had hardly started mine, so he poured himself another cup.

‘I have a cheesecake and a small dessert wine for after,’ he said.

I laughed, but couldn’t help myself saying, ‘I hope you’re not driving back to Ullapool. I might have to arrest you.’

‘Spending a couple of nights at the Highland,’ he said.

‘You never said you were leaving,’ I said. The words sounded jarring. I regretted speaking as soon they were out my mouth. I hadn’t intended saying anything about that, then suddenly there they were. Words spoken.

He continued to eat and drink for a while, looking steadfastly out over the view, then finally he cleared his throat, coughing gently into the back of his hand.

‘You know how it is, son,’ he said. ‘Goodbyes and all that. Questions. Where are you going, what are you going to do? We’ll miss you. Don’t forget us. You lucky so-and-so. The going going-away card passed around the building, the hastily bought present, arranged by people who didn’t really know me.’ He shook his head, looking mournfully at the ground. ‘See?’ he said, picking up slightly, ‘it’s depressing me just thinking about it now.’

He laughed, and I laughed lightly with him. We didn’t talk much after that, sitting in companionable silence, looking out over the mountains. Somehow, though, the feeling of sadness that had suddenly appeared with the change in the tone of his voice,never went away. Eventually, after a little more food, a little more conversation, we said goodbye and went our separate ways.