My original manuscript for THESE ARE THE STORIES WE TELL, 2021’s forthcoming blockbusting literary crime novel described by the Daily Worker as ‘the last hope for all mankind’, is filled with song and movie lines for which I’d need to ask permission. I did it to add colour, when the book was circulating around all those edi 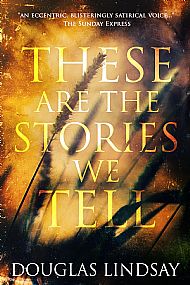 tors who ultimately turned it down. Now that it comes to it, I don’t really intend seeking several permissions, so I’ll be rewriting the necessary scenes as required. All but one.

This entry reminded me of a time when you shared personal details about your private live with your hardcore followers. Something about you calling your kids 2 of 3 and similar hilarious stuff.

I can't remember where this happened. On a blog? Somewhere else on the web? I have this terrible idea that you are indeed sharing personal stuff somewhere and I'm just too thick to remember where it was.

So thanks for clarification in advance.

Also: I do not know the song. I guess I'm too young (born '82) and from the wrong country (not the British Isles).
But it's great that you went ahead and did it despite facing backlash from your loved ones. 120 quid is not a crazy amount. It's kind of reasonable considering that the result is a work of art that'll propel you into the spheres of immortality. Maybe.

Not Markus,
Thank you! Definitely a solid choice to go with Rupert and the Frog Chorus...
I did the stuff about the kids in the weekly newsletter when we went to Belgrade. Letter From Belgrade it was called. At the time I thought it'd be really interesting writing about post-war Yugoslavia (its was still Yugoslavia when we got there), but then I just ended up writing about the kids every week. They were funnier than post-war Yugoslavia. I put most of that stuff together into the slim digital volume Kids, And Why You Shouldn't Eat More Than One For Breakfast.