The Long And Winding Road To THE UNBURIED DEAD

THE UNBURIED DEAD, the new police thriller from BLASTED HEATH, has been fifteen years in the writing.

It's been a long road. Regular readers of this column - all three of you - will know the book as 21 Years On The Back Of Dixie Klondyke's Spanish Guitar. The book's journey from there to here has been a long one; a tale of derring do, treasure, pirate ships, zombie counterattack, lost civilisations and much time spent tapping at a keyboard.

I wrote the first draft of this book in 1997. It was my first go at a fairly straightforward police procedural, although in redrafts over the years it became rather idiosyncratic and, in places, downright silly. I came to dislike it, and envisioned it sitting in a drawer until a hundred years after I was dead, at which time someone would discover it, realise it was shit, and throw it out.

When Kindle started up in the UK, I thought I'd dust it off. I put it up there for £4.99 - how optimistic was that? - and printed a couple of hundred copies. I remained unsure of the nutritional value of the book, so didn't make any effort to publicise it. I'd published a book that I didn't want to sell.

Then Al Guthrie, Scottish crime writing legend and now Supreme Editor For Life at Blasted Heath, got hold of it. He saw potential in it, and got me to start working on it again. I unpublished Dixie Klondyke within a few weeks of having published it in the first place, and did not lament its passing.

A year later, THE UNBURIED DEAD is ready to go. The plot is much the same as it was in the Dixie Klondyke days, but the tone is dramatically different, the main police protagonist has much greater depth, the disturbed killer is much more disturbed. Having neither liked the story nor the detective, I'm now keen enough on both to be about to start work on a book that is, for the moment, imaginatively titled THE UNBURIED DEAD II.

The only people to read it so far are the Blasted Heath guys. They are obviously disposed to like it. However, when BH Marketing Supremo For Life Kyle MacRae e-mailed to say, "Brilliant book. Clever, insightful, wonderful turns of phrase, funny, wince-worthy, out there, restrained…" I hope he was putting into words what most others will think when they read it. 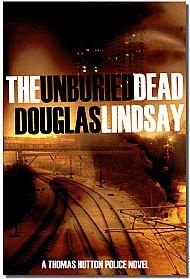 Comment from Douglas Boyce at 22:09 on 14 July 2012.
thank you for the explanation that The Unburied Dead and Dixie Klondyke is pretty much the same book. I thought I was going mental! I was one of those who bought it first time round as I always do with your books and I did enjoy it. Now I know I am not suffering from a severe case of deja vu I will finish this and start looking forward to the next installment now I know what the hell was going on!