The Case Of The Stained Glass Widow

THE CASE OF THE STAINED GLASS WIDOW is a new eBook from Blasted Heath, available today from Amazons everywhere.

Regular readers of this site – of which there were, at the last count, more than five – might be thinking, hang on a second, wasn’t The Stained Glass Widow up here for a while, for free? And now you’re expecting us to fork out £0.99? Outrage!

Well, yes it was, for a while. However, the time has come for DCI Robert Jericho to take his full-time place in the pantheon of miserable British detectives. The first Jericho novel – WE ARE THE HANGED MAN – will be coming from Blasted Heath some time in June, or thereabouts. The Stained Glass Widow has now been rewritten so that it introduces Jericho and some of the aspects of his life that will be given more detail in the first novel. The story has also been expanded so that it is now 10,000 words long. This works out at £0.000099 per word, which is not that far being free really, is it? And some of the words in the book are so good they’re worth double that.

Hopefully, although I haven’t actually discussed this with Blasted Heath yet, there will be three or four of these Jericho shorts a year, along with a full-length novel each year too. Soon enough, Alan Rickman will be playing Jericho in two hour shows on ITV on a Sunday evening.

Here’s the description of THE CASE OF THE STAINED GLASS WIDOW:

A man is found brutally murdered in the Chapter House of historic Wells Cathedral, the only clue to his death the knife left buried in his neck.

Having fled London several years earlier in an attempt to escape public recognition and the notion that he is some kind of modern-day Sherlock Holmes, the last thing the depressive DCI Jericho needs on his patch is a murder.

The victim’s widow was in Australia at the time of his death. Yet, despite the fact that she was interviewed by the police in Sydney within twelve hours of the murder taking place, Jericho remains unconvinced of her innocence.

When the small city of Wells sees its second murder within a week, Jericho becomes entangled in the world of a widow who seems anything but upset by her husband’s violent demise. 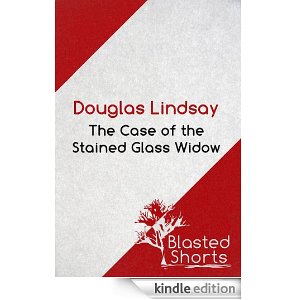