There's a new This Blasted Life posted over on the Blasted Heath website, wherein Elvis Shackleton reveals the distressing news that the much-anticipated forthcoming Douglas Lindsay blockbusting, guaranteed No.1 crime thriller WE ARE THE HANGED MAN has been delayed. The exact reasons for the delay - as well as the length - are not yet known, but publishing insiders fear the worst.

Economic pundits are already predicting that every day the book is not released costs the British economy something in the region of £45million. We asked Treasury Minister Chloe Smith for exact figures, but she replied by saying, 'Um… well…. families…. businesses… blah.'

WE ARE THE HANGED MAN author, Lindsay, 48, remains unavailable for comment. Lindsay has been neither seen nor heard of since January's "Sherlock Incident", and is still thought to be in hiding, living the life of a peasant computer programmer in a yurt on the Mongolian steppe.

Click on the image below to read the latest in what is turning out to be the most long drawn out publishing story since Harold Brodkey's Runaway Soul.

While there are thought to be few questions over the manuscript of We Are The Hanged Man, there is some concern over the notorious blood-soaked nonuple murder ballet that frames the denouement of the book. ‘You can’t just have a guy with a massive erection murdering people willy-nilly,’ said Gustav Connery, crime critic at the Greenock Telegraph. ‘It strains credulity to have that much cock in one scene, particularly when there’s no sex involved.’ 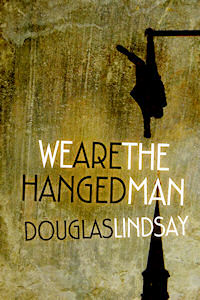