With Long Midnight Publishing winding down its print publishing operation, and with the vultures of calamity circling over the rotting carcass of the publishing company who once printed books that the critics called "paper with words on", all that will be left of the one-time massive multi-media conglomerate is the digital version of 2008's crack political thriller, LOST IN JUAREZ.

Clutching at the final desperate straws of hope, LMP Marketing Director, Elvis Shackleton, today unveiled a new package as they seek to relaunch the title and spur the company back towards the Bookseller Top 10 Best Publishers Ever List.

Speaking exclusively to This Blasted Life's Malky Eight Feet, Shackleton outlined his overall corporate vision for the future of LOST IN JUAREZ.

MALKY EIGHT FEET: So, you've got this great new cover. Tell us about it.

ELVIS SHACKLETON: It's the result of a seven month consultation period. We used designers, we used marketing specialists, we used photographers, we polled, we ran a six week X Factor style TV show on ITV5.

M8F: So it's not just something you knocked up on your computer in twenty minutes? 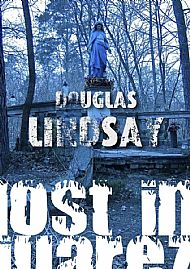 M8F: Well, however it was arrived at, it's a great cover. What kind of impact are you looking for from this new approach?

ES: We're hoping that by the end of the year we'll have total unit sales of Lost In Juarez of around 4 million.

M8F: Holy crap, 4 million? That'd be staggering. How many sales do you have at the moment?

M8F: …… So, let's get this straight. In just over four years you've sold around 1,500 copies of the novel. You change the cover, and as a result you hope to sell three million, nine hundred and ninety-eight thousand & five hundred books in the next three months?

ES: For example, I'm talking to you…

M8F: I have a readership of six. Of them, four already have the book and the other two think Lindsay's shit. The cover could have a picture of Mary Louise Parker naked on it and they still wouldn't buy it.

ES: We looked into some of those things but decided not actualise any of them in a marketing buy context.

M8F: So, if you're not going to use any of the regular, but expensive, marketing options, how do you intend to generate enough interest in a four year old book in order to meet your sales aspirations?

M8F: Good luck with that.