The very idea of followers panders to the modern day notion of the celebration of the individual. The needs of society don't come first any more, the needs of the individual come first. And it's reasonable within this notion that individuals should have followers. You don't have to be a leader or a prophet or even have anything remotely interesting to say for yourself for people to follow you. We're all equal, we're all entitled to followers, which is exactly why society is drowning beneath the humungous weight of mediocrity, and why civilisation will collapse and we'll all die in a blaze of pedestrian, puss-filled, internet-driven vomit.

Well, once again… that. What he said. And by 'he', I mean me, eighteen months ago. Been on Twitter again for the past year and a bit. Quite enjoy various things; the occasional joke, the links to news items that you wouldn't otherwise have seen; prefer to follow PMQs on Twitter than actually listen to it. Nevertheless, I don't like contributing, don't like getting into conversations, therefore I never say anything and invariably stop myself responding to other people. Also hate the My pants are too tight level of tweeterdom that everyone sinks to.

So, I closed it again. One hundred and seventy people on Twitter just lost a follower, and chances are that some of them at least will have angst over it. That's what Twitter does. It breeds angst.

Nevertheless, what with being a tortured, complex writer type, with a constant need to write shit down, I have to put it somewhere. So now I'm putting it here. On this website, where hardly anyone will look at it. (Which, to be honest, isn't that different from when I put stuff on Twitter.)

There will be no snappy back and forth conversations, as it's a moderated forum and other people's comments have to be checked before they're posted, but if anyone wants to say something then please do. As long as it's not about the tightness of your pants.

Otherwise, I'm quite happy to sit alone in the corner at the internet party. 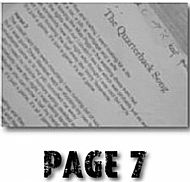 Comment from Mark at 14:48 on 15 January 2013.
I had angst because someone i was following disappeared. Hopefully that's slightly less pathetic than angst over losing a follower? Maybe it's worse?

RSS? Hmm.... Just had a quick look at the admin section of the site, and I'm not really any the wiser. I'll give it a longer look tomorrow and see if I can work it out.