For years now the book-buying public has been demanding the release of a Barney Thomson compendium - no, really, they have - a collection of the seven novels in one perfectly packaged digital place. Now, to widespread public and critical acclaim, here it is: The Barbershop 7.

They're an honest bunch at Blasted Heath. This isn't some dodgy DVD release, where they tag on lots of extras of minimal interest, an added scene here or there, and an interview with the proofreader or the person who made the tea, in order to get you to buy something you already have. If you already own the Barney Thomson series, there's nothing new for you here.

This is just what it says on the front of the virtual box. The seven unexpurgated Barney Thomson novels in all their extraordinary full-length magnificence. 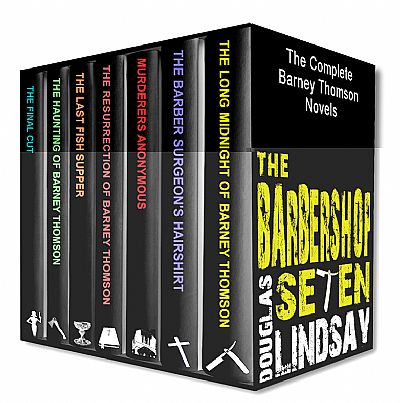 Comment from Don Lee at 21:04 on 16 February 2013.
Just to say, THE BARBERSHOP SEVEN is the most delightful reading experience I've had in a long while, so many thanks. Lindsay has indeed redeemed and yes even advanced the "barbershop junky death novel" for our time. Thanks, dude.
Comment from Rod Dyson at 15:40 on 18 February 2013.
Just got into your books, having followed leads from some other favourites - Bateman, Brookmyre and Hiassen. Every bit as good. Laugh out loud funny and brilliantly written. Got the first three on Kindle only to then realise you had brought out the complete set. Hey, more to look forward to!! Thanks for the great entertainment. The only problem is not reading them in one go - don't want to run out too quickly. Cheers
Rod Dyson, Somerset.