Long Midnight Publishing was in turmoil this morning with the announcement of the temporary withdrawal and complete rebranding of the debut Elvis Shackleton collection, EBOOKS WILL EAT YOUR CHILDREN'S FLESH.  With the news that sales had fallen well short of the projected 250,000 downloads - some publishing insiders are guessing close to 250,000 short - LMP shares fell to an all time low on the Nikkei, and opened on the FTSE down £15.26 at £0.00.
Financial analysts are predicting a rollercoaster day on global stock exchanges as a result of the collapse, and questions are already being asked about LMP chief executive and Barney Thomson author, Douglas Lindsay.
'This whole Elvis Shackleton exercise was Lindsay's idea,' said publishing guru Professor Malcolm Connery of Glasgow's Institute of Special Things. 'The buck stops right there, so there's no point in him trying to pass the blame off on the marketing consultants who suggested this epic fail of a mixed up crazy idea in the first place.'
As of this morning, the name Elvis Shackleton has been removed from the book, which is now being published as FOR THE MOST PART UNCONTAMINATED, and credited to Lindsay, the original author.
It seems likely that LMP will launch an internal audit into the disaster, and some predict the consequences could be far reaching.
'It's more than likely that Lindsay will be fired, and that someone else will be brought in to write Douglas Lindsay books,' predicts Professor Connery. 'Something as important as the Barney Thomson series, and the follow up novels for Thomas Hutton and DCI Jericho, should not be left in the hands of a talentless hack with the business acumen of a goat.' 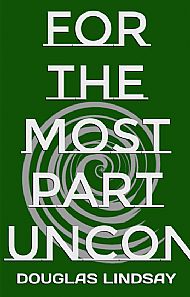