The publishing industry was in raptures today with the announcement of the imminent digital arrival of BARNEY THOMSON ZOMBIE KILLER, the short novel in which Barney Thomson kills zombies.
Previously published online as Government Of The Living Dead, the book has been re-drafted, topped and tailed with remarkable scenes set in Millport to give the book greater continuity within the whole Barney Thomson oeuvre, and given the iconically mysterious new title, which has swept across the internet like a flesh-eating plague through cattle. 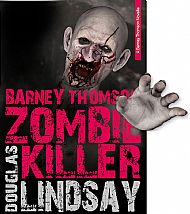 'As a title, Government Of The Living Dead was always going to have to go,' said publishing insider Professor Malcolm Connery of the Glasgow Institute of Special Things. 'It was based on a remark that David Cameron, when leader of the opposition, made about Gordon Brown's government. If you could call it a government. As such, it was a title of infinite and subtle political nuance and sophistication. While subtle, nuance and sophistication are words that can be applied to any of Lindsay's books, in essence the book's publishers Blasted Heath are aiming at the high-end gore market. They're looking for the punter who wants to read about people's faces getting chewed off with one bite. Political nuance is out.'
While Lindsay's future as the writer of Barney Thomson remains in doubt, following the Ebooks Will Eat Your Chilrden's Flesh debacle, experts are nevertheless predicting that BARNEY THOMSON ZOMBIE KILLER will be this year's fastest selling ebook, with downloads estimated at 14million worldwide in the first week.
'It'll be like Taylor Swift meets The League of Gentlemen,' said Connery. 'The world will never be the same again. Like ever.'