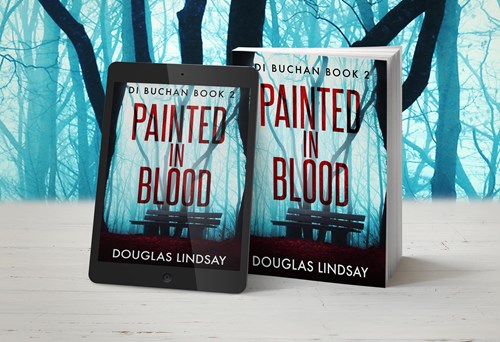 Here at Long Midnight Publishing, work has been continuing over the festive period, readying the second DI Buchan novel – PAINTED IN BLOOD – for mid-January publication.

The journey of the novel from its beginnings as a random outline in the creative department of LMP, to a fully-formed entry in the nascent detective series, is a familiar one of twists and turns and false starts, an idea salad that eventually produced the novel that critics are already calling, ‘another book in another series by that guy.’

It began with a rough idea for a literary romance. A couple meet in a bar, a relationship develops, and then an artwork is made of the woman – a nude – and placed in a gallery in a different city. The couple split up, but the artwork remains out there in the world. Being a literary novel, something vaguely surreal, with no requirement for explanation, ensues.

I got one chapter into that story before deciding I didn’t have time to write a literary novel, and the conversion to crime began.

The bar stayed the same, the couple became DI Buchan and his ex-wife. That part of the story then went into the first Buchan novel. The art side of the story then came to form the basis for the plot of the second. By this time the single nude painting of a woman had become three nude paintings, by a fictional Spanish artist, Diego Baquero. The plot hinged around the last of the three paintings, and the book was entitled THE THIRD BAQUERO.

It was written as the first Buchan novel was doing the rounds of the London crime editors, and so it sat there untouched for several months. In the end, no publisher wanted the first Buchan. It was then that I had the idea that my agent could go out with the second Buchan novel. However, since it is entirely stand alone, I had the genius notion that I could rewrite it as the first book in a completely different series. Thus, The Third Baquero was temporarily unleashed upon the earth as the first book in the DI Elizabeth Bishop series.

However, like its predecessor, it was shunned by editors everywhere, and that was that for Elizabeth Bishop, except I’d kind of borrowed her from the sixth Hutton book, so she will exist for the rest of time as a strange sort of MI6/NCA mash-up operative.

The Third Baquero was restored as the second Buchan book, the series was green lit for LMP publication, and then in an executive meeting of the full creative board, the decision was taken to give the book a more crime-y title. The Third Baquero became PAINTED IN BLOOD.

Like many of my contemporaries, I do zero plot planning before starting to write a book. You have whatever hook you want to lead with, you start writing, and the story hopefully tells itself. You create mystery and work it out along the way. Sometimes this pans out well, sometimes not so much.

The second Westphall, Boy In The Well, for example, I think is a bit of a stinker. Was never happy with that plot resolution.

I like the way Painted In Blood works out, however. Plotting always feels like a struggle, but I think this one comes together quite nicely.

But there’s only one way to judge for yourself, crime fans. PAINTED IN BLOOD, out 19th January 2023.