The Holy Trinity of Decapitated Heads

There was a time last year when my daughter was dragging her reluctant boyfriend to the National Gallery in London, and I said, ‘Get him to look for the Holy Trinity of Decapitated Heads, that should keep him interested,’ and I think it possibly worked for about half an hour, and when I saw him next he said, ‘Well, I found the Holy Trinity,’ and the way he said it made it sound like a thing, because I suppose the way I’d said it in the first place had made it sound like a thing. Unfortunately, it’s not a thing. But it should be. There are a lot of decapitated heads in classical art, and it would be a good way, for example, of getting children more engaged. Every kid likes a decapitated head.

The second Buchan novel, PAINTED IN BLOOD, involves art, and I used it in passing to mention the proposed Holy Trinity. There are not, I’m afraid to say, any decapitated heads in the book. Nevertheless, when art academia finally catches up, and the Holy Trinity of Decapitated Heads finally becomes a thing that is taught in primary schools, I hope Painted In Blood gets its rightful place on the Wikipedia page. 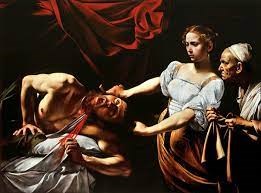 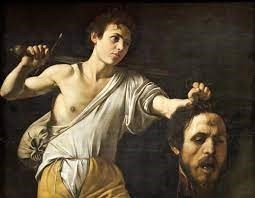 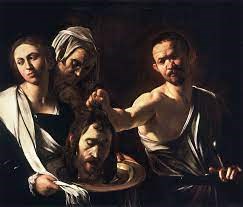 Caravaggio, who knew a Holy Trinity when he saw one,

painting the heads of Holofernes, Goliath & John the Baptist

And here’s the passage from the book:

Buchan drove on in silence. The road was busy, the turn-off to Bothwell and Uddingston queuing out onto the motorway.

‘You like art?’ asked Kane, after a while. Buchan glanced at her. They were in the queue, edging along.

She let the conversation go for a moment, transported somewhere, then she said, ‘My dad took me to the National Gallery in London when I was six. I mean, who does that? You’re in London, there’s all sorts of things to do – or, at least, I presume there are, I haven’t actually been back – and he took me to look at art. I remember walking in, looking at him like, is there at least a café that sells ice cream? And then he said,’ and she paused, smiling to herself, ‘oh, my dad could read me like a book, he really could, he says, you have to find the Holy Trinity of Art Gallery Decapitated Heads. I mean, like for years afterwards, I thought that was a thing. Like an official thing to look for in galleries. The Holy Trinity of Decapitated Heads. Then at some point I had a boyfriend who was an art student, and I said this like, you know, like it had capital letters and people wrote books about it, and he said, what are you talking about? The holy trinity of decapitated heads? And he’s looking at me like, what is wrong with you?’ She paused again, still smiling.

‘Did you find them?’

‘In the National when I was six? Sure. I loved it. I was like, oh my God, people in the old days painted decapitated heads? That’s awesome!’

‘And a lifelong fascination was born,’ said Buchan drily, and she laughed. ‘You ever had one in a case?’

‘Not yet. Not too disappointed about that, to be honest.’

‘Who were they anyway?’

‘Goliath, John the Baptist and Holofernes.’

‘Assyrian general. Judith cut his head off. People have always loved painting that shit.’ She paused, then added, ‘My art student friend, going for the complete buzzkill, said my dad should’ve also included Orpheus and Medusa. So it should be The Holy Pentalogy, but then, that’s not actually a phrase. And he went on about it, arguing that if you were really going to do a trinity, he’d probably go for Medusa over Goliath, and by the time he’d finished talking, I’d ended the relationship.’

Buchan laughed. Eventually they escaped the motorway, then they were driving past the site of the old Glasgow Zoo and heading towards Bothwell.

Painted in Blood, a crime novel not about decapitated heads, out 19th January 2023.