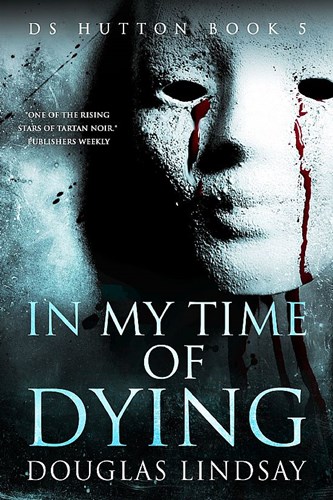 IN MY TIME OF DYING, DS Hutton Book 5 - Publication Day

It’s publication day for IN MY TIME OF DYING, the fifth instalment in the DS Hutton crime thriller series, a moment in history that some critics are already calling “something that happened in 2020.”

The Internet rumour-mill has been churning for months, speculation running rampant about the novel, after the tagline, Murder in the time of coronavirus, was made public. However, with author Douglas Lindsay holed up in a remote Monogolian cave, working feverishly on the book’s final edits right up until this weekend, and the team at Long Midnight Publishing playing their cards high and tight, articles such as Buzzfeed’s 21 Amazing Scenes In The New Hutton That Will Make You Lose Your Shit could do little more than hazard wildly inaccurate stabs in the dark at the book’s narrative.

At last, after a summer and early autumn when the media could talk of little else, In My Time of Dying is finally here, and as Fuzzbeed noted this morning, “this book is as awesome as you’d expect, and readers have all the feels.”

With Lindsay about to embark on a world tour, where he will be speaking to select socially distanced, single-digit audiences, in the most remote highland areas of more than seventy-nine countries, friends of insiders in the world of publishing are describing Hutton 5 as “the book that saved the industry.” No one was available for comment to say which industry it was that it saved.

Professor Malcolm Connery, of the Glasgow Institute of Special Things, is in no doubt about its forthcoming place in the lexicon of literature shaping the generation. “Some writers stand on the shoulders of giants,” said Connery this morning, speaking on video link from his thirty-fifth floor office in Glasgow’s exclusive Latin Quarter, “some writers are giants, and some are just shoulders. Lindsay is none of those.”