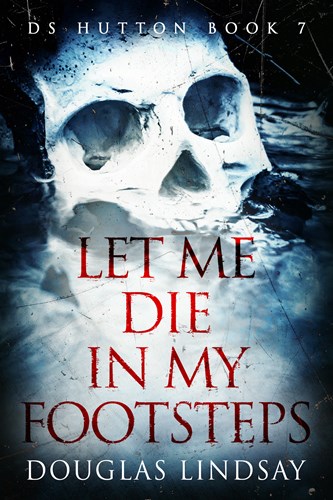 DS HUTTON BOOK 7: LET ME DIE IN MY FOOTSTEPS

When I first mentioned the seventh DS Hutton book on social media in December, I wrote, “On the off-chance civilisation has not fallen by 25th April next year, the latest Hutton will arrive.” Getting in just under the wire.

My usual method of writing a Hutton book is to start with the title, get a cover design, cobble together some sort of blurb that might approximate the finished story, upload the book to Amazon with a publication date five to six months in the future, and then start writing. It usually works.

This time I was a little more cautious before pulling the trigger on the pre-release, as I was instinctively not quite so confident in the process until I was about halfway through. I had my title and cover, and in the early stages I felt that neither was particularly relevant. I contemplated changing them, and then ultimately decided not to bother, sticking with what I had. Not that either title or cover ever actually became relevant.

As Sun Tzu would note, they are what they are.

The title comes from the Dylan song, which is about dying in a nuclear war, which has far more relevance to the times, than to the content of the novel.

Detective Sergeant Hutton has taken a month’s leave, after inadvertently sleeping with the chief inspector. He is a few days into his stay in a small Highland village when the local police come calling for aid. A young woman has gone missing. Hutton, as uncomfortably addicted to police work as he is to sex and vodka, agrees to help.

The hunt is on for Alice Schäfer. Part-time Post Office worker, bit-part player in the low-budget vampire feature shooting nearby, and promiscuous lover with a reputation around town. Add in the curious case of the Lodge of St Augustine, and Hutton has to cast a very wide net.

Someone, however, does not want Hutton involved. Low-level threats quickly escalate, and the terrorising of Hutton has begun. And as winter weather closes in, and the villagers are trapped in a suffocating snowstorm, it’s not just Hutton who will be haunted. Blood flows, screams disappear in the night, and at last a killer will show her hand…

I took our hero on holiday because I wasn’t sure what to do about the relationship between Hutton and DI Kallas. I didn’t want to bring that to an end, but I thought it’d be too much to have another entire book where Hutton is moping around like an early nineteenth century poet, despairing over his unattainable love. We’ll save that for Book 8.

Taking Hutton away also allows us a change of scene, so now, rather than Cambuslang public park and the 1960’s precinct, we have snow-covered hills and a flat calm loch, changing to a tumultuous loch as and when the plot requires it.

I’m not entirely convinced by the plot – and I wrote it. But as Hutton novels go, I think it’s a reasonably decent entry in the series. As entertaining as usual. That is, if you think they’re entertaining in the first place.

My favourite Hutton novel is In My Time of Dying, followed by Plague of Crows. My least favourite, The Unburied Dead. Number 7, I feel, falls somewhere in the middle.

LET ME DIE IN MY FOOTSTEPS: available from your neighbourhood Amazon store now.