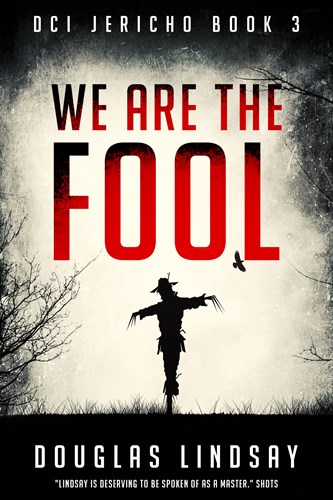 Every now and again someone somewhere wonders aloud about when the third DCI Jericho book will appear. When this happens, an angel gets its wings.

Now, let’s not get carried away about the frequency of such an occurrence. Someone asks me about Jericho 3 roughly as often as one of our current Conservative government ministers tells the truth. So, the driving force for me thinking for the past five years that I ought to get on and write Jericho 3 really comes from within. It’s a trilogy that remains to be completed. I’m nearly 57. One day soon I’ll die, and this book might never have been written. Sure, no one will care, but I shall perish knowing I never wrote that stupid book. It’ll be my last thought, just before the jaws of the velociraptor crunch through the side of the spaceship and close around my neck.

A couple of weeks ago I decided the time was right to embark on Jericho 3 – which has, all along, been entitled WE ARE THE FOOL. I started reading WE ARE THE HANGED MAN in order to refamiliarise myself with the characters and the narrative. That was when I hit the problem.

DCI Jericho is supposed to be attractively melancholic. Well, melancholic bordering on suicidally depressed. Unfortunately, due entirely to poor writing, he really just comes across as a bit of a dick. On top of this, the plot is absurdly far-fetched, and I’m not entirely sure that I ever thought it made much sense.

WE ARE DEATH I always thought a much more agreeable and pleasing affair. It has a completely different feel to it, and it’s too bad that really no one’s going to read it until they get past the first book. The plot is perhaps just as equally far-fetched, but it’s more in keeping with the tone. I’m fond of We Are Death. It’s in my top five. (I mean, top five of my own novels, not top five best novels of all time. It barely makes the top ten of that list.)

My favourite character in Jericho 2 was DI Badstuber of the Swiss police. In the first draft, I killed DI Badstuber, but that made me sad, so I rewrote the ending. However, even if I ever get around to writing Jericho 3, the chances are she won’t be in it. I doubt she’d fit, whatever’s due to happen. At some point in the last year I realised that DI Kallas in the Hutton novels is more or less exactly the same character as DI Badstuber. Not an intentional act of rebirth, but obviously my subconscious knows what it’s doing. I shan’t kill DI Kallas either.

I’m waffling. Basically, I’m not going to write Jericho 3 at the moment because I just don’t want to. Despite already having the book title and the book cover. And don’t be fooled. Just because I have the title and the cover, don’t think for a second that I have either the plot, or the faintest idea how I’m going to wrap up the million loose ends from the conclusions of the first two books. Haven’t a clue.

For the moment I’m finishing off Hutton 6, and then will write the first novel in a completely new series. With a lead character who hopefully isn’t as much of a dick as Jericho. Or Hutton, because let’s be honest, Hutton – loveable rogue though he may occasionally be – is also a bit of a dick.

Jericho 3, We Are The Fool, will have to wait, and the literary world is going to have to hope that the velociraptor does not find me in my spaceship any time soon.